St Paul of the Abbadesses

Virtual Tour 360°
TheChurch of St. Paul of the Abbadesses is situated on the plain, near the confluence of the Tesciostream with the Chiascioriver, a few hundred metres from the ancient road connecting Assisi to Perugia, not far from the town of Bastia Umbra. The sacred building is now part of the municipal cemetery, built in 1862.

The church was part of a Benedictine women’s monastery, whose existence is documented in Pope Innocent III‘s bull of1198, where it is recorded asMonasterium Santi Pauli ancillorum dei cum omnium cappellis. In In the 13th century, the monastery was famous throughout the region for its wealth and power, but in spite of its prestige, the coenoby did not survive for long in its original location and the nuns of Saint Paul of the Abbadesses, like the other female suburban settlements, had to move within the walls of Assisi, since the communal struggles made their stay in the countryside increasingly difficult and dangerous. In 1389, the commune of Assisi, in order to defend itself from the raids of Perugia, thought of transforming the monastery into a fortress, but the Perugians, after having unsuccessfully ordered to stop this construction, came to this site and destroyed it, saving only the church. In 1862, the municipal cemetery was built around the sacred building, of which St Paul’s serves as thechapel.

St Clare and the Benedictine Monastery

The church and the monastery of St Paul are linked to St Clare because of two episodes – narrated in the Legend of St Clare the Virgin– at the antipodes of her religious life. The first took place on 28th March1211 (or 1212)it was the Holy Monday of that year when St Clare, just seventeen years old, after fleeing from her father’s house and taking her vows in the church of the Portiuncula, was brought there by St Francisto save her from her family, who tried several times, even violently, to bring her back home. Legendhas it that thesaintclung to the altar, affirming that in no way would she allow herself to be taken away from the following of Christ. The monasteryhad not been chosen by St Francisby chance because, besides being very influential and authoritative, it was also inviolable and it was dangerous to carry out any violence or abuse inside it. St Clare‘s stay, however, was short: the saint, in fact, thought it appropriate to transfer her to the church of Sant’Angelo di Panzo, especially as she did not belong to the monastic community as she did not adhere to the Benedictine Rule. The second episode occurred a few years before her death: St Clare, by then very ill, had reached the end, but God seemed to want to delay her passage. A nun from the monastery of St Paul had a vision: she seemed to be with the nuns of San Damiano at the saint’s bedside. Suddenly a lady appeared to her and said that Clare would not die until the Lordcame with his disciples About a year later, in 1253, the pope and his cardinals moved to Assisi and wanted to visit the sick woman. Thus the vision of the Saint’s transit could have its effect, since thepope represents the person of Christ, while the cardinals are his disciples: St Claredied on 11 August1253.

The Romanesque church, built in pink and white Subasio stone, has a gabled façade with a single entrance portal (originally wider and arched), surmounted by a large arched window, inserted in the place of a mullioned window, which was divided by a twin column, destroyed in 1857. The apse, externally decorated with half-columns, corbels and small arches, has a mullioned window in the centre surmounted by a relief representing: On the back of the roof, there is a bell gable with a single bell.

The interior of the church, oriented (i.e. with the apse facing east), has a rectangular plan with a single nave and a wooden truss roof, with a presbyteryraised by three steps. In the semicircular apse, opened at the centre by a single-light window, are visible some fragments of wall paintings, made in the Umbrian style, which represent: In the right-hand corner of the presbyteryis the ruin of a Roman column, part of the ancient altar to which, according to tradition, St Clare of Assisi grasped to avoid being taken away by her family. Along the left wall of the nave and the presbytery there are traces of three walled doors, which probably once connected the church with the monastery, which was destroyed in 1389. 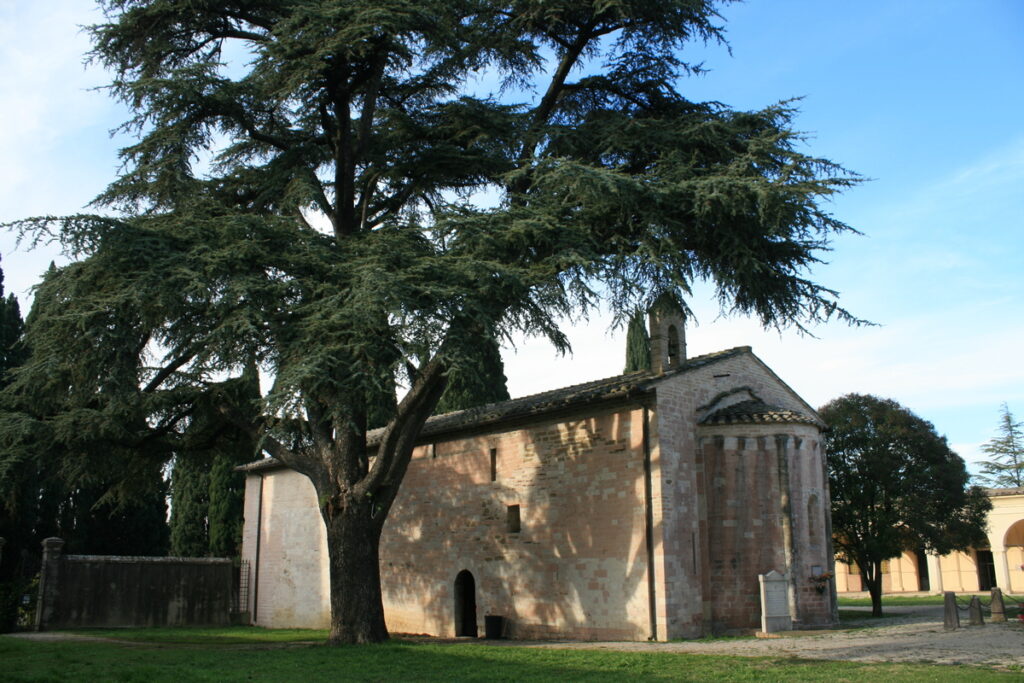