The exhibitions in Bastia Umbra arose in 1969 with the aim of relaunching the ancient early summer fairs, characteristic of sharecropping areas. The first editions had a provincial character and assumed regional importance only after the birth of the Region. In the 1970s, the September trade fair, Agriumbria, grew both qualitatively and quantitatively.

In 1974, in fact, both the Exhibition of Agricultural Machinery and the Competition for Machine Safety, which had been organized in Perugia for years, were transferred to Bastia. In 1975 Umbriacarni was born, an event aimed at promoting the innermost areas and on the margins of the development of our Region.

It is held in spring and has now reached the September event in importance. Umbriacarni was born with the task of relaunching breeding (with advanced and modern equipment) and information on alternative meats: rabbits, pigeons, sheep and goats, which with the profound sharecropping crisis were reduced to absolutely marginal and qualitatively degraded levels. These events, Umbriacarni and Agriumbria, have now assumed national significance.

The organization of these events since their birth has been managed within the municipal structure; today it is entrusted to the “Agriumbria” Association founded in 1980 which includes, in addition to the municipal administration, the Region, the Sviluppoumbria, the organizations of the cooperative movement, the ESAU, the Merchants’ Union, the Regional Association of Industrialists , the Province of Perugia and the Province of Terni. 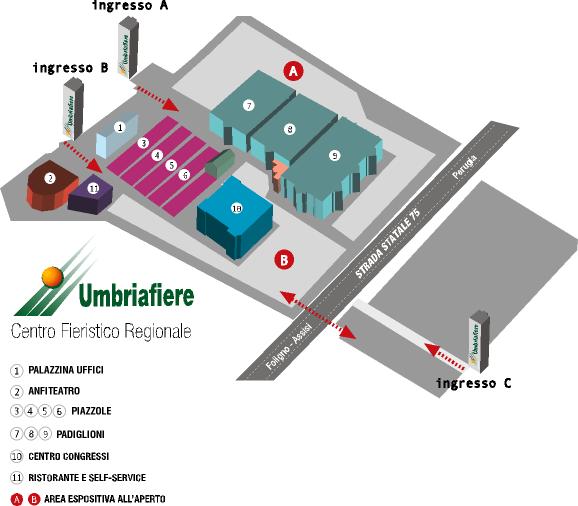 In 1983 the project for the creation of a new and more modern exhibition center was presented to the FIO (Investment and Employment Fund), the first part of which has already been completed. The exhibition center now has an area of 50,000 square meters, the exhibition area is about 40,000 square meters of which 10,000 indoors and 30,000 outdoors. On average, 350 companies are present at the various events, of which 2/4 companies present, 1/4 companies represented and 1/4 breeders. Each event is estimated to be visited by approximately 70,000 people.