The history of the city

Tradition records the Umbrians as the first inhabitants, a very ancient people who existed before the Etruscans and the Romans. Their presence is documented from before the 5th century.

They were a powerful tribe with an advanced civilisation, a sacred people for their faith and a warrior for the armed defence of their territory, since they did not fight to conquer.

It was then the Etruscans who settled to the west of the Tiber, which remained the border between the two populations for centuries. Also called the Tyrrhenians, they had landed on the Tuscan coast and settled in the region that they called Etruria, from where they began to expand their dominion, subduing, among other places, the city of Perugia and pushing the Umbrians back across the river.

The first penetration of the Romans dates back to the 4th century B.C.; about fifty years later, the whole Umbrian region came under their control. 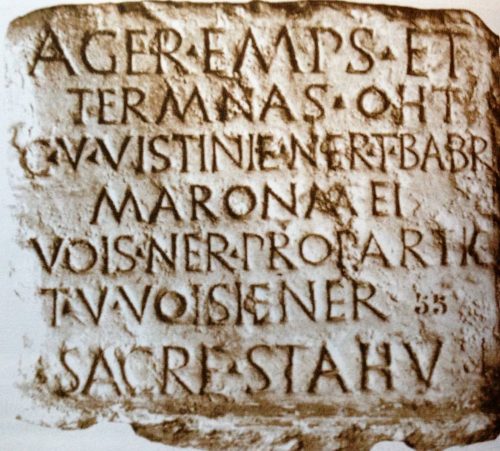 BOUNDARY MARKER BETWEEN UMBRIANS AND ETRUSCANS

The Middle Age before the year 1000 begins substantially with the barbarian invasions and the collapse of the Western Roman Empire (476). Umbria too, towards the end of the 4th century, suffered damage as a result of the violent waves of destruction.

Already exhausted by the incursions of the Goths, Bastia was involved in a phase of the war fought against them by Greek soldiers (535/553) sent by Emperor Justinian, who transformed Italy into a province of the Eastern Empire after the victorious battle of Tagina (today Gualdo Tadino) and the death of the last Goth king Teja.

In 568 another cataclysm was waiting. The Lombards, having broken the eastern borders of Italy, swept across the peninsula, pushing beyond the Tiber and settling in the Duchy of Spoleto. The Byzantine counter-offensive stopped the new invaders on the Chiascio, which thus became the border and the battlefield between Byzantine Umbria and the barbarians on the other side. Pertanto l’Insula Romana o Romanesca rappresentò un luogo forte di frontiera contrapposto al gastaldato longobardo di Assisi. Therefore, the Insula Romana or Romanesca represented a strong frontier site against the Lombard gastaldate of Assisi. The division made by the river between the Byzantine Duchy of Perugia, corresponding to the corridor linking Rome to Ravenna, and the Lombard Duchy of Spoleto was so deeply rooted in the memory of the inhabitants that the countryside to the left of the Chiascio was called Territorium Langubardorum and that to the right TerritoriumRomanorum.

A last testimony is offered today by the word Romavecchia, a locality between S. Lorenzo di Bastia and Costano, and by the presence of the Castle of the same name, recorded in the maps of the 17th century in the same area.

When Charlemagne’s Franks invaded Umbria towards the end of the 8th century, our territory became part of the jurisdiction of the Duchy of Spoleto, a Frankish principality from 821 to 920, which became a province of the Holy Roman Empire.

With the spread of Feudalism, a temporal State of the Church was created, thanks to the donations made by the Lombard and Frankish sovereigns to the Pope in exchange for his moral support.

At the beginning of the 9th century, the papal dominion included the Duchy of Ravenna, the Duchy of Spoleto, i.e. Umbria to the left of the Tiber, and the Lower March.

In this historical excursus there are no references to allow a reconstruction of the origins of Bastia, around which it is only possible to speculate.

The fact that it was ancient is proved by various remains of Roman buildings found on the site such as architraves, friezes, column trunks, capitals, in rustic villas and burial grounds.

The settlement only emerged after the year 1000 when, under the name of Insula Romana, from the 11th and 12th centuries, it began to appear in documents until it became part of history in the 13th century.

After a certain tranquillity favoured by territorial isolation, the small land was dragged into a series of wars linked to municipal interests intertwined with those of the Empire.

The rise of the communal age had found Assisi fighting with some neighbouring castles, including Isola and Cannara, over border issues.

A constant phenomenon in the life of the municipality was in fact the conquest of the countryside with the consequent subordination of the countryside to the city. These were the times when the Papacy was concerned about imperial dominance in Italy because Frederick I, appealing to Roman law, sought an autonomous justification for his authority independently of ecclesiastical investiture

Assisi became Ghibelline to repel the expansionist aims of Guelph Perugia, whose policy aimed to subjugate territory and labour, especially in the area of greatest strategic importance: Isola, today known as Bastia. Castrum Insule was then a stronghold in the heart of the plain, with the old castle and the village protected by strong walls.

AT THE HEART OF THE COMMUNICATION ROUTES

The Umbrian territory was served by a network of roads branching off in all directions. The town of Bastia itself was favoured in terms of communications by being crossed by the Via Antiqua, an important artery linking the Via Flaminia and the Amerina, which already existed in Roman times. It joined Perugia to Foligno, the convergence point of the Via Flaminia, which came from Rome via Narni, Carsule and Bevagna, with the side road to Spoleto. It ran lengthwise through the Umbrian valley in a westerly direction and, leaving the Porziuncola on the right, continued along the road of S. Costanzotowards Isola Romana.

It penetrated into the primitive urban nucleus by entering through the eastern gate and exiting through theS Angelo gate, and from there, crossing the Chiascio on a wooden bridge, it crossed the locality of S. Lucia to go in the direction of the small rural church dedicated to the Madonna di Campagna. This was an area between the Tiber and Chiascio rivers, so called because of the fertility of the soil, compared to the swampy and unhealthy environment of the lower plain. The land of ‘Campagna’ is well shown on the map of the Territory of Perugia taken in 1577 by the Dominican friar Egnazio Danti, a scientist and cosmographer from Perugia.

This is one of the geographical tables painted on the Vatican Loggias on behalf of Gregory XIII. The Via Antiqua then crossed, near Spedalicchio, the Strada Traversa coming from Torchiagina, it grazed the Colle maquis towards Brufa, crossed the Tiber and joined theVia Amerìna, a side road of the Flaminia from below Orte, which ensured communications between Rome and Ravenna, touching Todi, Bettona, Perugia from where the roads for Gubbio, Arezzo and Chiusi departed.

The territory was also crossed by the Via Francigena, the most important road at national and international level. In fact, it was part of a great European itinerary linking Rome to France, using the route of the ancient Roman roads and the meeting point of numerous ramifications.

. It was created to connect the separate Lombard territories (the Duchies of Benevento and Spoleto) with Pavia, the capital of the Lombard kingdom, via the Cisa pass. It took on this name when it became the main road link with northern Europe, the Europe of the Franks. Later, due to its function as a pilgrims’ road, it was given the name Rominisca or Romea, i.e. the road leading to Rome. It penetrated our territory by going up the Tiber from Orvieto to Todi, Bettona, the Assisi Passaggio, from where, keeping to the base of the mountains, from the small church of S. Trinità to S. Salvatore delle Pareti, the oratory of a crucifers’ hospital for pilgrims, it reached, on the other side of the Tescio, the via di Campiglione, to which it associated its name, joining this route until it reached Collestrada where the roads for all directions were open. 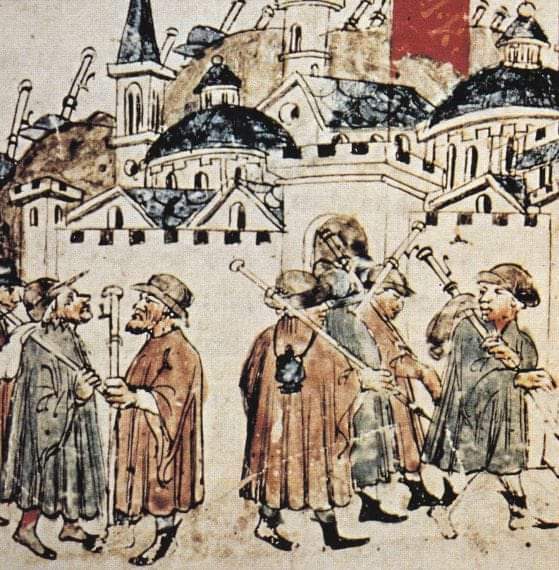 Pilgrims to Rome to the tomb of the Apostle Peter, to Assisi and Loreto, to Santa Maria degli Angeli for the indulgence of the Pardon, to Perugia for the Holy Ring

The same name was given to the Traversa road, which crossed at Ospedalicchio and was directed to Brufa, as documented for both stretches by 17th century maps and the map of the road network at the time of St. Francis, reproduced by Fortini.

We can see, therefore, how the original names of the roads were extended, for some of them, to “Francesca” or “Francigena” to signify that by travelling along them one would reach the ancient route of the main Jubilee routes. In this way, the pilgrims’ path was favoured because, with its many variations, it touched several districts and provinces, hus supporting the saying that all roads lead to Rome.  It was not without reason that it was called the motorway of the Middle Ages.

One road connected Assisi with Perugia. It started from Porta S. Francesco and was called the Campiglione road: via qua itur ad  balyam Insule. It crossed the  Tescio at S. Vetturinoand then the Chiascio on wooden bridges, winding its way to Collestrada after crossing the Strada de Traversa, also known as the Traversa di Campagna, at Spedalicchio  Strada de Traversa, detta  anche Traversa  di Campagna.

This medieval route benefited from the construction of the masonry bridge over the Chiascio, commissioned by Paul III, who was aware of the need to replace the narrow wooden bridge and facilitate communications between Assisi and Perugia.

Designed by the architect Galeazzo Alessi, it was adorned with the coats of arms of Paul III and Gregory XIII who, in 1581, restored the structure damaged by time and water.

The construction of this imposing road allowed Clement VII to open a new and straight road towards S. Maria degli Angeli, perhaps in view of the Jubilee of 1600, also because the Basilica of Santa Maria degli Angeli was nearing completion. It was here that pilgrims converged for the feast of the Pardon to gain the indulgence granted to St Francis by Honorius III on 2 August 1216.

This new papal road joined the Porziuncola with the S. Rocco gate of Bastia, from where it entered the large piazza dell’Aggiunta and then exited through the Perugina or Portella gate to reach the bridge over the Chiascio.

In this way another route was opened, alternative to the Via Antiqua, and soon became the preferred route, especially after it was classified as a coach road and in 1820 was built the arm over the Tescio, with its four arches.

It thus became the main artery from Perugia to Foligno, with the new name of Centrale Umbra, which carried all the traffic in the Valle Umbra until the early 1960s, until the present clearway was opened.