Church of the Holy Cross

Virtual Tour 360°
The Collegiate Church of Santa Croce is located on the eastern side of Piazza Mazzini, the heart of the historic center.

The Church of Santa Croce was built, together with the monastery of the same name, . in 1295by the Franciscan Order, along the Via Antiqua – an important communication route that led from Foligno to Perugia and Florence – and near the city walls of the ancient village of Bastia, outside the Porta Orientale, in front of which there was a large esplanade called theAggiunta. The original building was shorter than the present one and covered by a trussed roof. In the convent of Santa Croce, Blessed Corrado da Offida died (12 December 1306) and was buried: his remains, stolen in 1320 by Perugian troops, were moved to the Church of San Francesco al Prato in Perugia. In memory of the famous Franciscan friar, the Church of Santa Croce dell’Isola was also called the Church of Blessed Corrado, at least until 1403. In 1334, historical documents show that the façade with its Gothic portal and rose window had not yet been completed. A few decades later, in 1380, the Public Council of Assisi resolved to reinforce the walls of the Isola (now Bastia Umbra) with 17 bastions, to restore the castle defences and to enlarge the walls to include the Franciscan complex of Santa Croce and the new village built next to it. In the 16th century, Fra’ Pietropaolo della Bastia, sacristan of this church, commissioned Tiberio d’Assisi(c.1470 -1524) to paint a fresco on the high altar depicting: In 1653, the Minor Friars left the monastery, after Pope Innocent X had ordered the suppression of the minor cloisters the year before. The complex then passed to the seculars, as a parish and priory, and it was here that CardinalPaolo Emilio Rondinini, Bishop of Assisi (1653–1668), commissioned five priests with various duties to assist the parish priest of Sant’Angelo in his pastoral work. In 1788, Pope Pius VI, at the request ofBishopCarlo Zangheri (1780–1796), established a college of nine canons in Santa Croce, headed by a prior, to administer it as the new parish seat. The priorof the new collegiate church was the parish priest of the Church of Sant’Angelo, which at this time was abandoned by the priests and began a long period of decline. In 1832and 1854, violent earthquakes seriously damaged the architectural complex and knocked down the bell tower, so that in 1855 a major restoration and expansion project was undertaken. The work, directed by the engineer Federico Picconi and Francesco Fortini from Foligno (or Fratini, the same man who had already directed the reconstruction of the Basilica of Santa Maria degli Angeli), gave the church its current neo-Gothic appearance: lengthening of the nave and demolition of the apse wall where the fresco of Tiberius of Assisi was located, which was lost; construction of the Chapel of St John the Baptist and that of the Sacrament; partial restoration of the façade; replacement of the original wooden roof with cross vaults. The parishremained in Santa Croce until1962, when the new Church of San Michele Arcangelo was consecrated.

The church has a gabled façade clad in two-coloured stone from Monte Subasio, opened at the centre by a rose window formed by eight small columns and a single portal in which we note: Entrance door leafs with theStationsof the Cross and saints (1942), carved wood by Domenico Mammoli.

The church, oriented (i.e. with the apse facing east), has a Latin-cross plan, small in size, with apse, cross-vaultedroof and a single nave divided into three equal bays. . The polychrome flooring with geometric designs was laid in 1932. The presbytery and the apse are located after the transept, a few steps higher than the nave,and are separated from it by a balustrade. The church was entirely decorated between 1884 and 1886 by the famous Perugian painterDomenico Bruschiwith tempera wall paintings: Place on the left wall are the works from the former Church of Sant’Angelo transported here in 1899by Domenico Brizi: At the endof the left wall is the Chapel of the Sacrament , decorated with two wall paintings by Domenico Bruschi , depicting: On the altar of the chapel is the most famous work of art preserved in the Bastia area: In the presbytery and apse are works mainly from the Collegiate Church itself, among which the following stand out: In the apse are the splendid stained glass windows made of fire-painted polychrome glass, depicting: Along the right wall are the following works: At the far end of the right wall is the Chapelof St John the Baptist, decorated with two tempera wall paintings by Domenico Bruschi from 1884-1886, featuring: The chapel also contains three valuable statues from the demolished Oratory of Good Death: 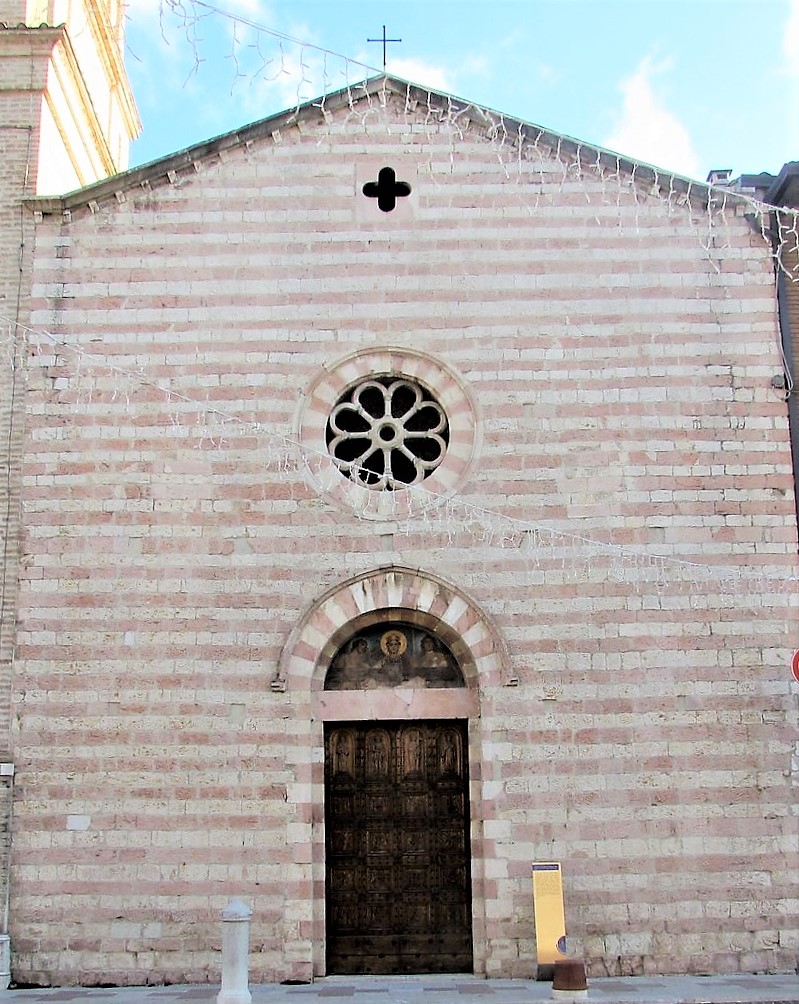