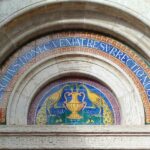 The municipal cemetery of Bastia Umbra, like others, was built following the Napoleonic edict that established that burials should take place outside built-up areas and at a suitable distance from them. The cemetery, built in 1862 (as recalled by the inscription inside the church of San Paolo delle Abbadesse), is surrounded by a high wall and covered by a portico, built according to the design of the architect Federico Picconi from Bastia, where the confraternities and various families built their tombs and funerary monuments, some of these designed by the Assisian architect Alfonso Brizi (1835 – 1920). The monumental layout of the cemetery and the decorative apparatus of the individual funerary chapels represent an interesting cross-section of the architecture and art produced from the second half of the 19th to the third quarter of the 20th century. . The artists, most of whom came from the Academy of Fine Arts in Perugia, were inspired by the artistic movements of the time: from Verism to Neo-Gothicism, but especially Art Nouveau, Art Deco, Eclecticism and Rationalism. The main sculptors and painters present with their works include: Romano Mignini (Perugia 1856 – 1918), Benvenuto Crispoldi (Spello, 1886 – 1923), Aroldo Bellini (Perugia, 1902 – Rome, 1984) and others. They were commissioned mainly by the bourgeoisie and the new industrial class, which was rapidly rising in the Umbrian economic and social scene in the second half of the 19th century. 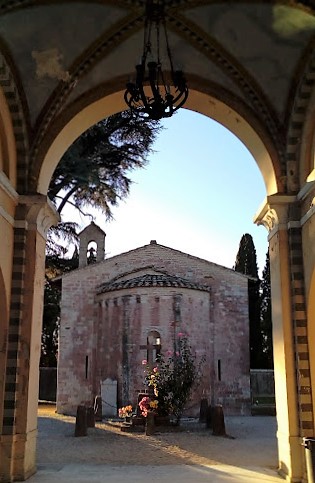