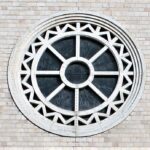 TheChurch of Saint Michael Archangelis located on the eastern side of Piazza Mazzini, the centre of the old town.

The parishchurchof Saint Michael Archangel was erected on the site of two adjoining17th-centurychurches, dedicated to Saint Anthony the Abbot and the Good Deathwith an oratory attached. Following their demolition, decided to gain sufficient space for the construction of a large temple, whose dimensions could contain the increased population of Bastia, the parish chose the project of the Perugian architect Antonio Bindelli(1899-1985), dating backto 1953. The church was built, in the words of the people of Bastia,“modern, welcoming, sober“, as the then parish priest,DonLuigi Toppetti, wanted it to be. Demolition work began in 1955,followed by construction work, carried out by the company Lunghi e Ciambottini of Bastia Umbra.

The church was consecrated on 29th September 1962,as recorded by the travertine plaque on the left-hand wall of the portico, with the attendance of the then Bishopof Assisi, Giuseppe Placido Nicolini (1877-1973), and CardinalSantiago Luis Capello (1860-1967), then titular of San Lorenzo in Damaso inRome.

The imposing building is inspired by the tradition of Umbrian sacred architecture from thethirteenth to thefourteenth century, reinterpreted in a modern key, according to a rationalist style that came to the region during the fascist and post-war periods, where a sense of pure, monumental forms, juxtaposed according to criteria of symmetry, dominates. This is Antonio Bindelli’s own style, which can be seen in another of his sacred building projects, theparishchurch of San Felicissimo in Ponte Felcino, a hamlet of Perugia. Although the latter has a single nave, there are notable analogies: in the clarity of the stone facing, which combines “the abstractness of the modern style with the familiarity of the materials”; in the portico in front and in the use of the arch element, which in Felcino’s building is multiplied in the twelve openings of the large window.

The church, oriented (i.e. with the apse facing east), is 45.30 metres long and 18.15 metres wide, while its maximum height is 25 metres. Along the whole width of the gabled façade, entirely covered with stone slabs in regular courses, there is a portico with seven arches, slightly raised over the square, and enriched by the rose window and ten niches. Twelve single-light windows, 7 metres high and 1.5 metres wide, open onto the side walls. From the portico, one enters the church through three bronze portals, of which only the central one has on its doors a decorate made in 1962 by Umberto Travaglini and representing:

The interior has a basilica plan with three naves and the presbytery is raised above the nave with a vaulted ceiling. The confessionals are inserted in the walls of the aisles, two on each side. The vaults are cross-vaulted in the nave and barrel-vaulted across the axis of the church in the side aisles. The lower register of the walls and pillars are clad with stone slabs. On closer inspection, the interior respects some of the instructions of the SecondVatican Council (11 October1962 –8 December 1965), showing that it partially anticipates the indications that will emerge from the work of the Council. The highaltaris built with a large stone mensa, isolated and not adjacent to the back wall. At the same time, elements that remain in line with tradition persist, such as the presence of the two side altars with their respective tabernacles (removed in the mid-1980s). The decorationof the liturgical hall was supervised by Pietro Vitali and carried out by a number of young artists and workshops from central Italy who collaborated with him, most of which were already in place for the consecrationof the hall. Among the works present are: Moreover, on the side altars there are two big altarpieces made in 1962, in enamelled copper applied on wood, by Edgardo Abbozzo, representing: Along the left wall opens the baptistery,where on the back wall is located: During the Christmas period, a splendid monumental work is hoisted onto the Eucharistic throne and made visible to the faithful by means of a mechanical system: 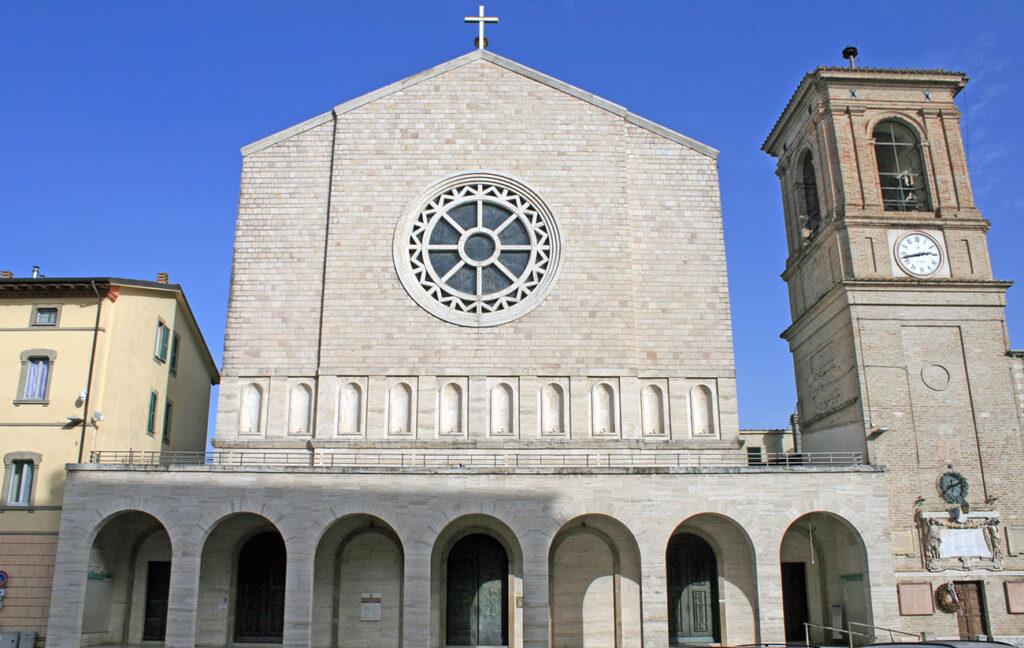