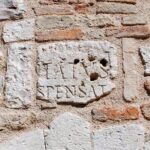 The former Church of Sant’Angelo is located on the eastern side of Piazza Umberto I, the centre of the old town: the sacred building, now deconsecrated, has been converted into an auditorium.

In the early Middle Ages, the village of Bastia was one of the first territorial outposts of the Diocese of Assisi in the plain marked by the presence of the Chiascio river. It was a parish centre and its parish church (pievania, from the Latin plebs, “people”, i.e. achurch with an adjoining baptistery or baptismal font) was actually Sant’Angelo, dedicated to the Archangel Michael. The church was built in the centre of the town, whose heart was today’s Piazza Umberto I, in direct line with the entrance to Porta S. Angelo, which probably had a drawbridge. The dating of the first building, dedicated to St Michael the Archangel, is uncertain, but it probably already existed in the 9th century. The first documented trace of the existence of the church dates back to 1294, when the name appears in a will where the de cuiusrequested his burial in “Santi Angeli de Insula Romanesca’. At the end of the15thcentury, with the growth of the village of Bastia and of the faithful, the church was rebuilt on the foundations of the previous building, in the structural form as it still partly appears today. Inside, it was decorated with frescoes of the Umbrian school, largely commissioned by members of the Baglioni family from Perugia during their dominion over Bastia (1431-1571), the most significant of which were those painted by Tiberio d’Assisi. In 1499, the high altar was equipped with a splendid polyptych by Niccolò Alunno from Foligno, now housed in the Church of Santa Croce. In the 17th century, the church was home to five confraternities ( the Holy Sacrament, Our Lady of Mercy, Our Lady of Loreto, St Martin and St Blaise), each of which had its own altar with a painted altarpiece on canvas (no longer existing), as mentioned in the pastoral visit of 1717 by Bishop Marco Palmerini (1716-1731), and its own processional banner. In 1788, Pope Pius VI, at the request of Bishop Carlo Zangheri (1780 – 1796), established a college of nine canons in Santa Croce to administer the new parish seat, of which the parish priest of Sant’Angelo became prior. From that moment on, the church began to decay and all religious ceremonies began to be celebrated in the new collegiate church, which also became more central to the expanding settlement. The earthquake of 1832 caused a portion of the roof to collapse and several cracks in the walls. Moreover, in 1858, theStatistical-Civil Topography of Bastiadocumented that the church was now half-dead and used as a burial ground. After the unification of Italy, as a result of the Pepoli decree (13 December 1860), the building passed to the state and then to the municipality of Bastia. Municipal records, in the historical archives, show that the church, now deconsecrated, was rented to private individuals between 1872 and 1888, who used it as a timber warehouse. In 1894, after a long legal dispute, the parish priest succeeded in obtaining from the municipality the reinstatement of the building as an ecclesiastical possession, but the Commission of Fine Arts made him responsible for “scrupulously preserving those leftover paintings”. In 1899, the Regional Office for the Conservation of Monuments, on the orders of the then director Giovanni Sacconi, ordered the removal of the main works. Domenico Brizi was entrusted with the task of recovering the murals and had them transported and placed in the Collegiate Church of Santa Croce. In the early decades of the 20th century, it was transformed into a cinema and later used as a theatre and recreation hall, gradually losing its original appearance. It was then sold to private individuals, who used it as a warehouse, destroying the interior and parts of the roofing structures. In 2003 the municipality decided to buy back the building and, after a long restoration and complex structural work, it was reopened to the public on 2 December 2017 as an auditorium. The Rione Sant’Angelo (yellow) has the name of this church, but its religious seat will be the new parish church of San Marco Evangelista.

The church, built in pink and white Subasio stone, has a gabled façade, decorated at the top with brick arches. It is currently opened by a single entrance door, surmounted by a large window, but originally had a double door and an oculus window in the centre. On the façade one can see a bare element from the Roman period:

The interior of the church, oriented (i.e. with the apse facing east), has a rectangular floor plan with a single nave marked by three pointed arches, supported by six masonry pilasters with a horizontal impost frame, a typical element of Umbrian architecture. The arches support a roof of laminated wood, but previously a trussed roof. The presbytery, divided into three bays, is covered by as many cross vaults supported by eight columns: two central ones, made of brick with white travertine capitals, richly decorated with alternating quadriglyphs and a smooth acanthus leaf; the other six, incorporated in the side walls, have single-crown stone capitals with smooth acanthus leaves at the top. 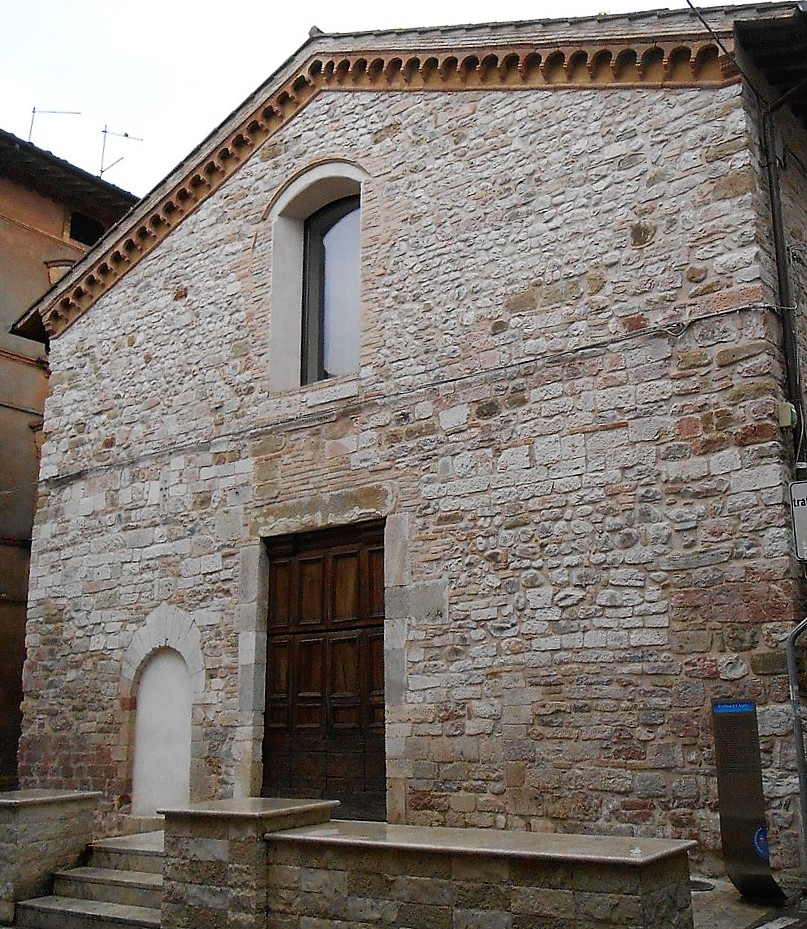